The world has suffered a great loss with the death of Archbiship Desmond Tutu over the weekend. 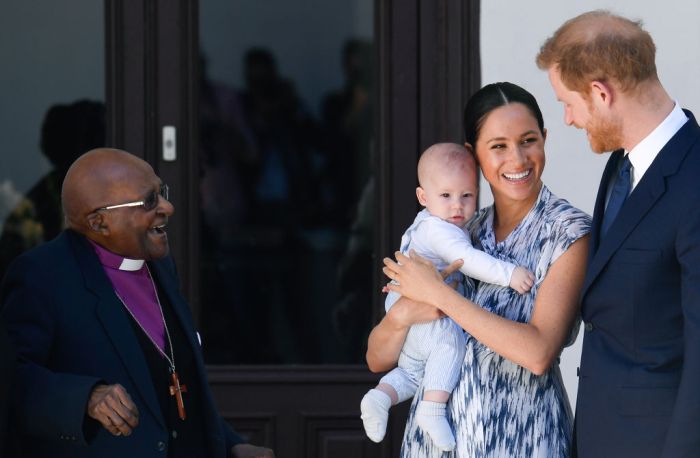 The 90-year-old South African civil rights icon’s death was confirmed Sunday, December 26 by the Desmond and Leah Tutu Legacy Foundation. Fortunately Tutu left an incredible legacy behind. The impact of the spiritual leader and activist was mentioned by many who were touched by his words and actions. We’re sharing just a few today, including the statement released by Prince Harry and Meghan Markle, who famously visited the Archbishop in South Africa during their 2019 tour of the country.

“Archbishop Tutu will be remembered for his optimism, his moral clarity, and his joyful spirit. He was an icon for racial justice and beloved across the world. It was only two years ago that he held our son, Archie, while we were in South Africa – ‘Arch and The Arch’ he had joked, his infectious laughter ringing through the room, relaxing anyone in his presence. He remained a friend and will be sorely missed by all,” they shared.

Harry’s grandmother, or as most of the world knows her — Queen Elizabeth also released a statement paying her respects:

“I am joined by the whole Royal Family in being deeply saddened by the news of the death of Archbishop Desmond Tutu, a man who tirelessly championed human rights in South Africa and across the world.”

“I remember with fondness my meetings with him and his great warmth and humour. Archbishop Tutu’s loss will be felt by the people of South Africa, and by so many people in Great Britain, Northern Ireland and across the Commonwealth, where he was held in such high affection and esteem.”

Leaders across the world paid respects, including the 46th President of the United States of America — President Joseph Biden, who released a joint statement with his wife Jill.

“On this morning after Christmas, we are heartbroken to learn of the passing of a true servant of God and of the people, Archbishop Desmond Tutu of South Africa. On behalf of the Biden family, we send our deepest condolences to his wife Leah and their children, grandchildren and great-grandchildren. And on behalf of the people of the United States, we send our deepest condolences to the people of South Africa who are mourning the loss of one of their most important founding fathers.”

But we were especially touched by the words of our 44th President AKA the Forever President, Barack Obama, who shared a photo with the late great leader along with these words:

Archbishop Desmond Tutu was a mentor, a friend, and a moral compass for me and so many others. A universal spirit, Archbishop Tutu was grounded in the struggle for liberation and justice in his own country, but also concerned with injustice everywhere. He never lost his impish sense of humor and willingness to find humanity in his adversaries, and Michelle and I will miss him dearly.

One of the greatest most peaceful Souls has left the planet. A hope giver, peace maker, justice warrior. Thank you Archbishop Desmond Tutu

Supermodel Naomi Campbell was also among those publicly mourning. She shared this quote by the Archbishop:

“We need to stop just pulling people out of the river. We need to go upstream and find out why they’re falling in.” “Hope is being able to see that there is light despite all of the darkness.” “Without forgiveness, there’s no future.

Campbell’s post, which featured several photos of Tutu, some solo, some with her mentor and their mutual friend Nelson Mandela, as well as a photo with Pres. Obama, also featured this caption:

A SAINT WAS TAKEN FROM US TODAY

THAT SMILE REMAINED THROUGH ALL YOU ENDURED , FIRM YOU WERE WITH UNCONDITIONAL LOVE . MAY YOU BE NOW REUNITED WITH TATA

EASY MOVEMENT TO THE OTHER SIDE !! ALL YOU DID TIRELESSLY AROUND THE WORLD WILL NOT BE IN VAIN REST WITH THE HIGHEST # HERO #SAINT 🕊🕊❤️🤍🕊🕊🙏🏾🇿🇦

He certainly seemed like the closest being to sainthood that most of the world will ever know.

“Please accept my heartfelt condolences and convey the same to your mother and other members of your family. I pray for him,” the Dalai Lama wrote. “As you know, over the years, your father and I enjoyed an enduring friendship. I remember the many occasions we spent time together, including the week here at Dharamsala in 2015 when we were able to share our thoughts on how to increase peace and joy in the world. The friendship and the spiritual bond between us was something we cherished.”

“Archbishop Desmond Tutu was entirely dedicated to serving his brothers and sisters for the greater common good,” the Dalai Lama, 86, continued. “He was a true humanitarian and a committed advocate of human rights. His work for the Truth and Reconciliation Commission was an inspiration for others around the world.”

He added: “With his passing away, we have lost a great man, who lived a truly meaningful life. He was devoted to the service of others, especially those who are least fortunate. I am convinced the best tribute we can pay him and keep his spirit alive is to do as he did and constantly look to see how we too can be of help to others.”

On Twitter, Malala Yousafzai shared a set of pictures of herself and Tutu along with one of his most famous quotes:

“‘Do your little bit of good where you are; its those little bits of good put together that overwhelm the world,’” she wrote. “A kind soul left us today. Let’s honour him and do our bit of good. Rest in peace Desmond Tutu.”

Our thoughts and prayers go out to the Archbishop’s family, blood and beyond as well as the people of South Africa. Our lives have all truly been touched by Archbishop Desmond Tutu. We’re so grateful for all he’s said and done and the impact he made through his work and his words.