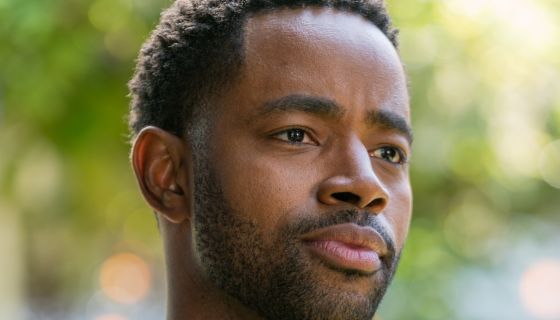 Nathan and Lawrence did WHAT?

After a string of minimally messy episodes, things swerved all the way left when Nathan and Lawrence got into a tender tussle over Issa at Tiffany and Derek’s going-away party that stirred up hilarious chaos across the internet.

In the most explosive scene of the season, Nathan catches Lawrence professing his love for Issa after she drunk-dialed him a month earlier. Naturally, Nathan took offense to Lawrence’s stunt and nearly came to blows while everyone watched in horror.

As for the woman in the middle of the melee, we see her reeling in the aftermath of delicious MESS, torn between two men who she’ll probably walk away from in the finale.

Showrunner Prentice Penny (who wrote and directed the entertaining episode) compared the messy sequence of events to a Western.

“I didn’t see one as a good man and the other as a bad man,” said Penny in an interview with TVLine. “Just two cowboys who had showdowns. To me, there were a lot of Western motifs. The going-away party is ‘the town,’ Issa is the ‘damsel in distress,’ and Molly and Taurean are the ‘town drunks.”

Hopefully, things pick up immediately after the spicy scuffle that complicated an already complicated dynamic between Issa and Lawrence who are STILL stuck on each other after multiple breakups and a baby.

“Westerns are played out in a lot of looks to build tension,” revealed Penny who looked to Ford and Sergio Leone’s work for inspiration.

“I wanted to play up a lot of who’s looking at who and why. So once I noticed that about the script, I just embraced that. Like some of my shots are close-ups and others are played off the shoulders and hips, as if they had guns.”

Who’s to blame for the chaotic keruffle? How do you think Insecure ends? Tell us down below and peep the funniest (and messiest) reactions on the flip.
Link to original source