America, it’s about time we have a serious discussion about Republican thug culture and how it’s destroying the white community.

The celebration of Caucasian gangster violence has got to stop before it fully takes control of the highly impressionable melanin-less youth because when white teenagers start shooting up schools, white America is always asking how we got here when it’s perfectly clear how—it’s all about the conservative urge to worship their bang-bang machines and deify the killers among them who use those weapons to cause havoc.

Kyle Rittenhouse has one claim to fame—he crossed state lines with an assault rifle he shouldn’t have been able to legally carry and he used it to shoot two people dead and seriously injure a third. In fact, Rittenhouse’s shooting spree represents the only reported deaths or serious injuries that happened during civil unrest in Kenosha, Wisconsin, in August of last year. However one feels about his acquittal and whether or not his actions were in self-defense (they weren’t—he’s just lucky to be white, but whatever) reasonable people would agree that he isn’t a person to be made into anybody’s hero.

I am excited to share that I will be speaking at AmFest!@TPUSA
More info at: https://t.co/DejGeDltKm pic.twitter.com/yuz1KhtC25

That’s right, the teen whose only notable accomplishment is turning a dangerous night into a deadly one has been invited to Phoenix, Arizona, to speak at Turning Point USA’s AmericaFest, a four-day conference for right-wing politicians, pundits and, apparently, color-redacted hoodlums who will shoot up the block the second anyone so much as takes a swing at them. For perspective, Turning Point USA is run by suspected white supremacist Charlie Kirk, used to employ Candace Owens to disseminate its hateful messages and cloaks its racism with so-called patriotism.

Not only is Rittenhouse set to speak at this year’s MAGA-mutt Redneck Revival, but he was invited to a private Dallas Cowboys club for a photo-op.

Folks, this isn’t the first time these perpetually set-trippin’ GOP thugs have embraced white criminality to the detriment of caucasified society.

Mark and Patricia McCloskey, the Dollar Store Boris and Natasha from St. Louis who pointed guns at protesters who, by most accounts, were not threatening them, used their display of armed thuggery to score themselves invites to the Republican National Convention and launch a bid for a Senate seat. They also attended Rittenhouse’s trial to offer moral support to the teenage killer.

A mob of MAGA rioters went full gang-gang on the U.S. Capitol and Tucker Carlson referred to them as “gentle patriots” while Majorie Taylor Greene played the race card while going to bat for criminals in their rightful place behind bars.

A separate mob of tiki torch-wielding thuglicans embarked on a modern-day Klan rally through Charlottesville that ended in a woman’s death and the sitting president of the United States referred to them as “very fine people.”

I mean, my God, people, just look at what these moral degenerates think makes for wholesome Christmas photos these days:

(No spare ammo for you, though) pic.twitter.com/EnDYuXaHDF

Listen, people, all I’m saying is it’s no coincidence that members of a certain political party have both praised the Ku Klux Klan and been praised by the Klan—and members of the washclothless community who subscribe to the same right-wing ideology, Greg and Travis McMichael and Wiliam Bryan, have recently been found guilty for what essentially amounts to a modern-day Klan lynching.

The point is, white conservatives have a culture problem, not an oppression problem, and if something isn’t done about it soon, we’ll continue to see more McMichaels, McCloskeys, white rioters, terrorists and committers of white-on-white crime—and we’ll damn sure see more Kyle Rittenhouse’s out there.

Is this really the America we want?

The Killer And The Loser Meet: Donald Trump Says Kyle Rittenhouse Visited Him At Mar-a-Lago 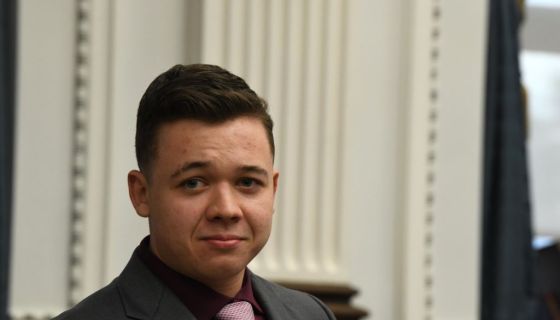