If conservative officials and lawmakers insist on continuing their propaganda-reliant war on Critical Race Theory, I just wish they would do so while leaving Black vernacular out of it. The word “woke” began as a simple thing—Black people’s natural way of describing the socially aware.

Then white people got a hold of the word.

We all know that when white people Columbus culturally Black things their innate senses of entitlement disallows them to not run wild with said Black cultural things to the point where the origins of what we created are permanently diluted into a sea of Caucasian appropriation. There may not be a better example of this than what white conservatives (and white people in general for that matter) have done with the word “woke,” and there might not be a better example of the whitewashed bastardization of the term than Florida Gov. Ron DeSantis using it in his proposal for new anti-CRT legislation.

According to the Washington Post, DeSantis introduced proposed legislation that would allow fragile white people…I mean, concerned parents to file lawsuits against schools they believe are teaching CRT—the college-level academic study that examines how racism and racial disparities have shaped America’s legal system and other institutions that Republicans have morphed into an umbrella term for any Black history or social studies that make white people uncomfortable.

And because conservative caucasity knows no bounds, DeSantis titled his legislation the “Stop Woke Act.”

In his never-ending quest to be more MAGA than any other Governor, Desantis this morning announces his ‘Stop WOKE Act’ to create a private right of action, modeled after TX abortion law, to sue schools if they catch them teaching CRT. pic.twitter.com/1M9a2Ns3tM

Today, we are taking a stand against critical race theory in our schools and in the workplace by calling for the enactment of the Stop W.O.K.E. Act. https://t.co/7iuEjyYKsj

In promoting the “Stop Wrongs against Our Kids and Employees Act,” (Boy, he really stretched himself into a white nationalist knot to find that acronym, didn’t he?) DeSantis claimed CRT “violates Florida standards to scapegoat someone based on their race, to say that they are inherently racist, to say that they are an oppressor, or oppressed or any of that and that’s good and that’s important.”

Of course, CRT does none of those things because examining the racism of institutions isn’t remotely the same as examining the inherent racism of white people at the individual level—but hey, why bother with the truth when one can use white fragility to enact laws people of all races will be forced to live with? (Ironically, that’s an actual example of why CRT exists.)

But the caucasity train didn’t stop at DeSantis blatantly lying about CRT while claiming “we have a responsibility to stand for the truth.” He also went on to continue the Republican tradition of invoking Martin Luther King Jr.’s name in justifying racist white nonsense.

“You think about what MLK stood for. He said he didn’t want people judged on the color of their skin, but on the content of their character,” DeSantis said Wednesday to a rally-style crowd in Wildwood, Florida. “You listen to some of these people nowadays, they don’t talk about that.”

In fact, between MLK and CRT, only one set of initials belongs to an unabashed judger of the whites.

MLK actually said plenty of disparaging things about white people during his life.

“Whites, it must frankly be said, are not putting in a similar mass effort to reeducate themselves out of their racial ignorance. It is an aspect of a sense of superiority that the white people of America believe they have so little to learn.”

Besides the fact that MLK wasn’t nearly as white people-friendly as conservatives like to pretend he was, there’s the fact that the lie-driven fight against CRT literally led to the Texas Senate passing legislation to drop requirements for educators to give lessons on MLK’s teachings and Tennessee parents filing a complaint aimed at banning books on MLK under the state’s anti-CRT law.

At the end of the day, King and other civil rights leaders were fighting for equality and equity, while DeSantis believes equity is a word used by non-conservatives to “smuggle in their ideology”—which is exactly what right-wingers are doing with legislation like this—and he believes it’s a term “we don’t need to have” anymore.

Gov. Ron DeSantis (R-FL) claims the word “equity” is code for people trying to “smuggle in their ideology”:

The racist hypocrisy of white people using Black vernacular to erase Blackness from the classroom is exactly why the term “woke” needs to be permanently scrubbed from the Caucasian lexicon, and anti-CRT legislation is exactly the kind of thing CRT is meant to study. 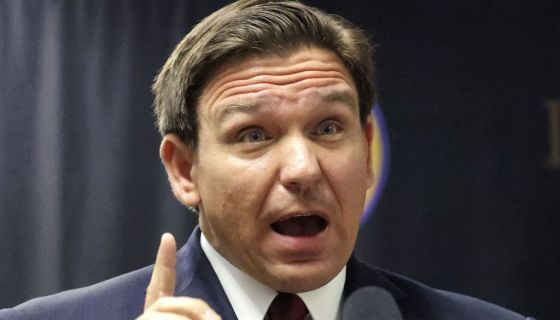