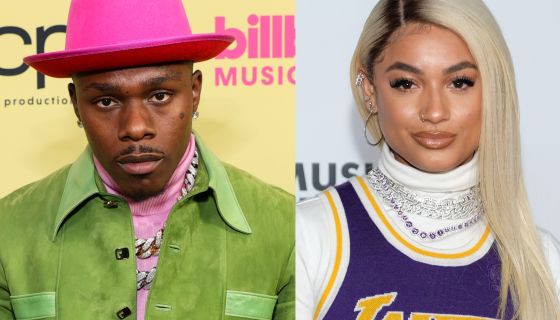 A yellow bone appears to be the last thing DaBaby wants after he called the cops on ex-boo/baby mama DaniLeigh in a childish coparenting kerfuffle that unfolded in front of thousands of people on Instagram Live.

DaBaby just went live on Dani Leigh page for like 20 seconds and sounds like they up to no good pic.twitter.com/UNb74AROcP

DaDrama popped off during a late-night spat between the not-very-mature adults who exchanged spicy words before the Live abruptly ended.

DaBaby, who seems to thrive in drama and dysfunction, claimed to be recording the toxic shenanigans as protection from any claims that may arise.

“Based on my reputation, with multiple threats of setting up an internet scheme and a person refusing to not let me go. Me and somebody else here knew to record her. I don’t beat on and yelled at and chased around like one of them fatal love attraction type girls.”

The rapper added that he wanted to “swiftly remove himself from any of the hostile behavior put on display.”

In one of several videos floating around social media, he can seen gaslighting and antagonizing her in front of his fans on IG Live.

A few moments later, Dani went live on her own page, capturing the moment she gathered her things to leave the apartment as two cops were seen diffusing the situation in the background.

#DaniLeigh #DaBaby You call the cops on your Baby’s mother Yoooo What a snitch pic.twitter.com/hss6n9zszD

Naturally, DaniLeigh had a drastically different account of what happened last night, saying that the rapper didn’t take kindly to having emergency contraception sent to his home.

Danileigh is a MESS for this post omg 😭😭😭😭 pic.twitter.com/QPrn9abtgS

“Since Baby want put up a “statement” with his cap a*s, I’ll put mine up … so we have been living with each other for the past three months since our baby been born. Tonight he wanna come in the room talking bout ‘I need to go’ don’t matter where I go…mind u…I have a newborn child,” she wrote.

“This man is mad because I had a plan B sent to his condo.”

She later went Live again–boohooing–after DaBaby claimed she was just a “side chick” in one of several low blows of the night.

DaniLeigh cries on Instagram Live, detailing her side of the argument with DaBaby. pic.twitter.com/4AX6DjL0IR

And yes, they ended up right back where they started despite the cops being called.

DaBaby and DaniLeigh still in the house together and things still not looking good at all 🤦🏽‍♂️ pic.twitter.com/Ayy8SonRt6

Whose side are you on? Tell us down below an peep the messiest reactions to DaBaby and DaniLeigh’s domestic dispute on the flip.

DaBaby wasn’t in no pictures, not at the baby shower , didn’t even acknowledge your pregnancy but now y’all live together 😭 come on fr DaniLeigh sit in the thinking chair & think 😭 ain’t no way we would even be in the same bed 😂

“DaBaby wasn’t in no pictures, not at the baby shower , didn’t even acknowledge your pregnancy but now y’all live together 😭 come on fr DaniLeigh sit in the thinking chair & think 😭 ain’t no way we would even be in the same bed” – thinking. chair.