The bravery and resilience the Tuskegee Airmen embodied during World War II will reverberate for generations to come and one of the members of the troop recently received a posthumous honor in recognition of his service. Malcolm E. Nettingham’s former school, Park Middle School, was renamed after him to pay homage to his legacy, My Central Jersey reported.

The Scotch Plains, New Jersey-based middle school changed its moniker to not only honor the sacrifices Nettingham made while serving, but to illuminate his impact and influence within the local community. The New York City native was drafted during WWII and served as a radio operator and gunner in the Army Air Corps. He broke racial barriers in the military by being a part of the first racially integrated flight radio class and became one of five Black servicemen to integrate Army Air Corps training. Nettingham was part of the illustrious Tuskegee Airmen collective; who were the first Black military aviators in the U.S. Army Air Corps’ history. After serving, Nettingham worked as a mason and played an instrumental role in the restoration of Scotch Plains’ Jerseyland Park Community Center. He passed away last year at the age of 101, but his contributions will forever be embedded in the fabric of American history.

The school is a significant element of Nettingham’s journey. He graduated from the institution nearly 85 years ago. “My father hardly ever spoke about his military career and being a Tuskegee Airman. It was only after 2007 that he started speaking about his experience,” Nettingham’s son Malcolm said in a statement, according to the news outlet. “My dad did a lot of things, but he was never outspoken, he just did things, he just acted.” The school—now dubbed Malcolm E. Nettingham Middle School—hosted a commemorative renaming ceremony on Veterans Day that was attended by his loved ones, community leaders and students.

The honor comes 14 years after the Tuskegee Airmen were awarded a Congressional Gold Medal. 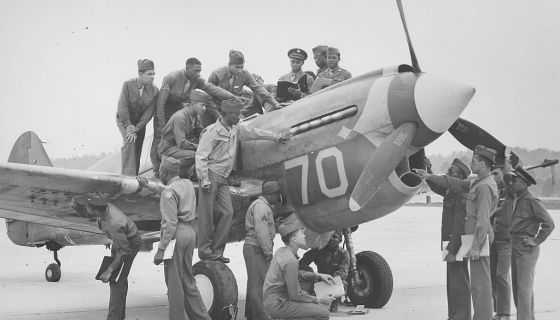